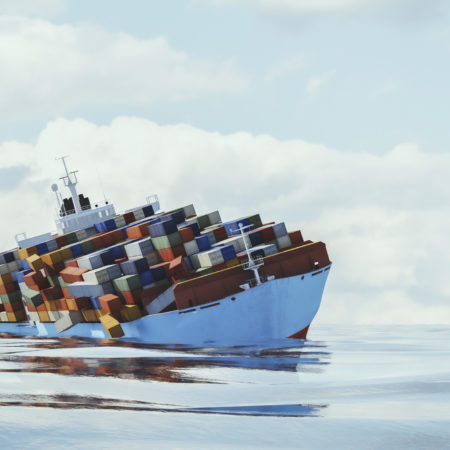 A container collapse on a vessel isn’t a new phenomenon, instead, they’re considered a cost of doing business on the ocean market. Weather issues, Acts of God, cargo not what it is tendered as therefore wrongly manifested and other troubles can hit in moments during a voyage. Consider that these ships cross oceans hundreds of times in a life cycle and it’s more surprising we aren’t hearing about these issues daily. It’s a dangerous job, a dangerous trip, and a dangerous position for shippers who don’t have the cargo insurance required to cover a loss that arises from a container stack collapse.

The largest container collapse to hit the news recently occurred on November 30, 2020, approximately 1600 nautical miles northwest of Hawaii due to a wicked storm. ONE Apus had to deviate from her voyage and taken to Kobe, Japan where she was determined to have lost more than 1900 containers. The Maesk Essen lost 750 containers in a storm and had to be diverted to Mexico instead of calling at Los Angeles as intended. Most recently, the MSC Aries was traveling westbound back to China and lost a number of containers overboard as well. These numbers are estimates of the boxes that went into the ocean and aren’t representative of the boxes that collapsed on the ship and caused irreparable losses to cargo that didn’t go overboard.

Is a container collapse more common?

Possibly. Like any other disaster or accident, there are a number of factors that contribute to a collapse, including human error, container instability, old containers that are in poor condition, misrepresented cargo, and the ever-growing size of ships carrying more containers than ever on the deck. As expected, the cost of these collapses are higher as prices rise, more cargo gets set into motion because ships are so much bigger and the intricacies of stacking create a puzzle of other problematic collapses that remain on board. It’s not possible to lose 1900 containers on a ship that only holds 1200 TEUs. As it stands, the current losses are calculated in the hundreds of millions of dollars.

Who pays for the lost containers?

Admiralty laws say, in layman’s terms, that the master of the vessel (read: the carrier) is not responsible for loss or damage, but rather all of the shippers with a cargo interest aboard share the loss. Any kind of loss or damage creates a condition called general average.

What is general average and why does it matter?

General average is a declaration ships make during extraordinary sacrifice or expenditure at sea, where cargo must be jettisoned to protect the ship, or containers are lost in storms. It splits the burden among cargo owners because there isn’t the time or ability to sort through which cargo must be jettisoned and storms don’t look at a manifest. The burden is placed on the cargo owners to split the loss both in the cargo of other shippers and in the issues to the vessel itself. Claims can take years to resolve and until resolution, all cargo remains seized until responsibility is met.   Bestway offers cargo insurance solutions that cover general average claims.

How can we avoid it?

An ounce of preparation is worth a pound of cure. Every carrier in the supply chain limits their liability – whether air, sea, rail, or truck. These limitations of liability are spelled out in the contracts of carriage for each conveyance. The most effective way to combat these varying liability regimes is to purchase cargo insurance that explicitly provides coverage from the named origin to the named destination.

Even better, with cargo insurance, the insurance company will provide the guaranteed bond to cover the loss and liability.   You could go so far as to say, adequate insurance coverage is the single Bestway to protect yourself, your business, and your cargo from a calamity at sea. Your Bestway International representative has all the information you need to manage your insurance risk safely. Contact us to learn more and get a quote today.

To learn more about general average and how to navigate it, here is a link to a timely and free informational webinar: https://www.roanoketrade.com/how-to-navigate-a-general-average-webinar/