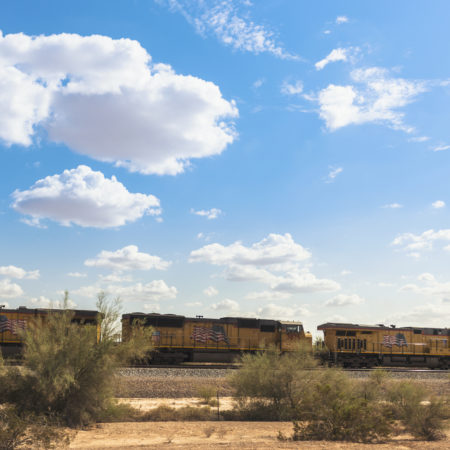 Los Angeles and Long Beach in Southern California represent the largest ports for sea freight arriving into the United States. In addition to the millions of containers which terminate and remain in area, millions more make their way across the country to New York, north into Canada and into the Midwest. The Union Pacific operates two major facilities in Southern California, one approximately twenty miles away from the port complex for domestic cargo which is the origin point for transloaded and reconsolidated intermodal containers bound for retailers and their distribution centers. Their second facility is focused on those international container arrivals and are meant to speed them from ship to far away depot as quickly and expeditiously as possible.

Recently, the Union Pacific began sending domestic trains to and from their Intermodal Transfer Container Facility, or ICTF, to Kansas City and St. Louis. Located five miles from the ports, this saves transportation, fuel and environmental impact for containers which are originating in SoCal but are not of international origin. But there’s a distinct lack of real estate available for such domestic transload activity near the port – a Jones Lang Lasalle survey from January found a vacancy rate of a whopping 0.9%.

Bill Mongelluzzo covered this for the Journal of Commerce (subscription required) after attending an event for the Los Angeles Transportation Club. Rob Leachman, a professor of engineering at UC Berkley, authored a paper on this subject earlier this year with these astounding statistics from 2015:

Of the 7.8 million TEUs (twenty-foot equivalent units) of waterborne, containerized imports through the SPB Ports in 2015:

What does this mean for the markets surrounding Kansas City? Great question. We see three distinct benefits for companies in our market:

The systems that Bestway has built and put in place are built on speed and efficiency. We understand fulfillment and why time matters, and we are committed to ensuring that all our clients can take advantage of Bestway’s proprietary solutions. If you are interested in how Bestway can help improve upon your domestic handling and distribution when your international ocean cargo arrives at a US port, contact us today for more information.